Hair loss in men is very common. It is often the result of genetics and caused by the effect of the male hormones, called androgens, on genetically predisposed hair follicles. This type of hair loss is known as male pattern baldness and technically referred to as androgenetic alopecia. Other causes of hair loss in men include autoimmune diseases that can lead to alopecia areata (patchy bald spots), fungal infections that result in tinea capitas (or scalp ringworm), and some medications and treatments such as prednisone or chemotherapy.  For some additional considerations on hair health, please view our Hair Health Check page to prompt some thoughts on other possible underlying reasons for your thinning hair. 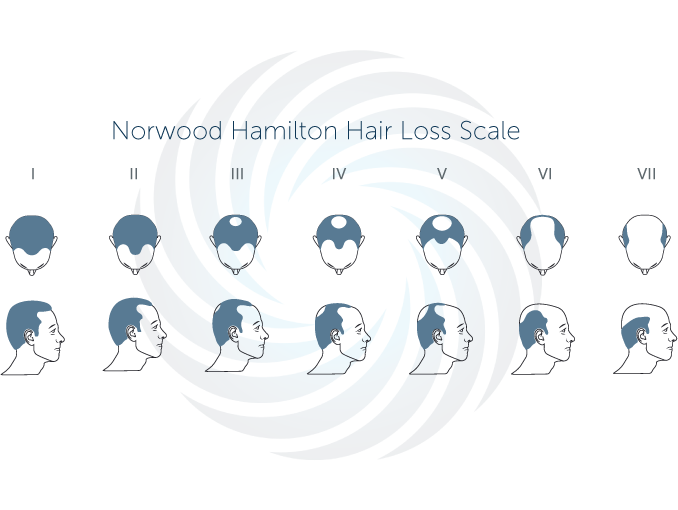 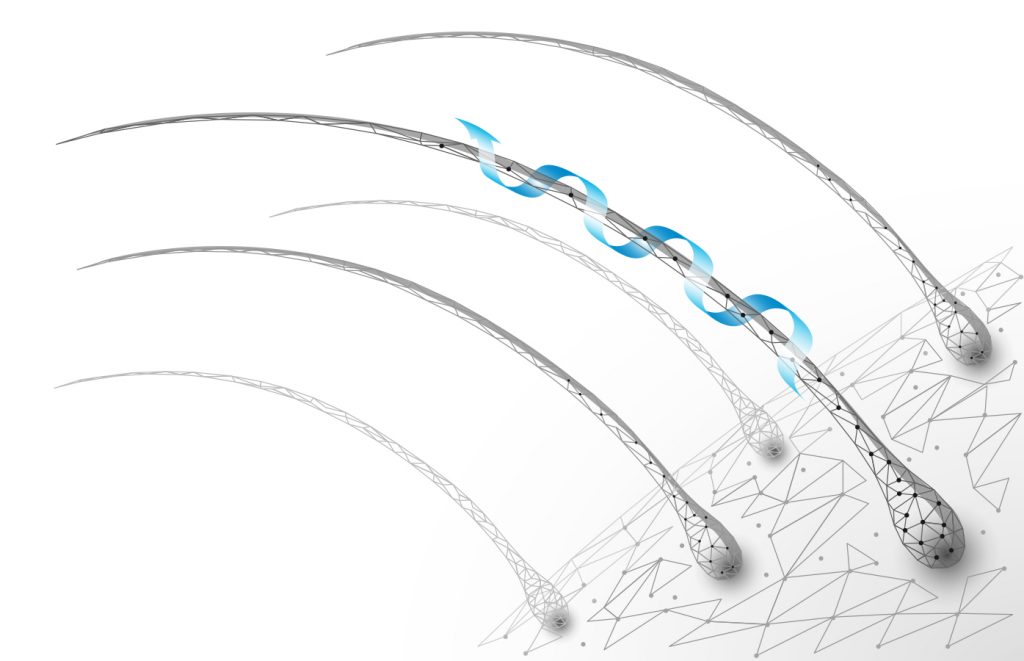 Male hair loss initially and typically affects the temples and the crown of the scalp, with hair either thinning or falling out. The progression of male pattern baldness is generally classified on the Hamilton–Norwood scale (first introduced by Dr James Hamilton in the 1950s and later revised and updated by Dr O’Tar Norwood in the 1970s).

Male pattern baldness is the cause of hair loss in men in more than 95% of cases. According to statistics, 25% of men begin balding by age 30 and two-thirds begin balding by age 60. Male pattern baldness is triggered by the sex hormone dihydrotestosterone (DHT), which is created from testosterone by the enzyme 5-alpha reductase. In those with a genetic predisposition to hair loss, DHT initiates a process of follicular miniaturisation. As the hair follicle deteriorates, the hair growth phase (anagen) is shortened, and the hair shaft is prevented from growing and maturing into the deeply rooted and pigmented hair. In time, hair becomes thinner. If left untreated the follicle will go dormant and stop producing hair completely.

Page load link
We use cookies on our website to give you the most relevant experience by remembering your preferences and repeat visits. By clicking “Accept All”, you consent to the use of ALL the cookies. However, you may visit "Cookie Settings" to provide a controlled consent.
Cookie SettingsAccept All
Manage consent

This website uses cookies to improve your experience while you navigate through the website. Out of these, the cookies that are categorized as necessary are stored on your browser as they are essential for the working of basic functionalities of the website. We also use third-party cookies that help us analyze and understand how you use this website. These cookies will be stored in your browser only with your consent. You also have the option to opt-out of these cookies. But opting out of some of these cookies may affect your browsing experience.
Necessary Always Enabled
Necessary cookies are absolutely essential for the website to function properly. These cookies ensure basic functionalities and security features of the website, anonymously.
Functional
Functional cookies help to perform certain functionalities like sharing the content of the website on social media platforms, collect feedbacks, and other third-party features.
Performance
Performance cookies are used to understand and analyze the key performance indexes of the website which helps in delivering a better user experience for the visitors.
Analytics
Analytical cookies are used to understand how visitors interact with the website. These cookies help provide information on metrics the number of visitors, bounce rate, traffic source, etc.
Advertisement
Advertisement cookies are used to provide visitors with relevant ads and marketing campaigns. These cookies track visitors across websites and collect information to provide customized ads.
Others
Other uncategorized cookies are those that are being analyzed and have not been classified into a category as yet.
SAVE & ACCEPT
Go to Top